The theme: James Bond and some of those who have portrayed him on the screen. 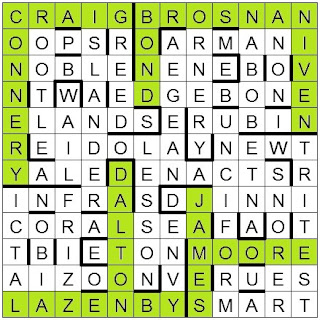 Some feedback from solvers:

Plenty of write-ins once the theme was revealed. Clues were straightforwardly signalled; 22d is neat.

A good workout with an Azed feel - barred grid and some very obscure words. But very fair and a personal touch on the unglued lights since in one of my roles (director of the Scottish International Education Turst) I can claim that 1d is my ‘boss’.

Somehow I got 2/3 of this puzzle completed before getting the theme. Once all the Bonds were in only a few were left. I enjoyed islander envy snorer. Very impressed at the grid construction.
Posted by Eclipse at 17:00