Unclued lights provide the names of the eight most recent holders of an office to be deduced.

Another circular puzzle from Eclogue, this time appearing in the March 2018 edition of Crossword Club. 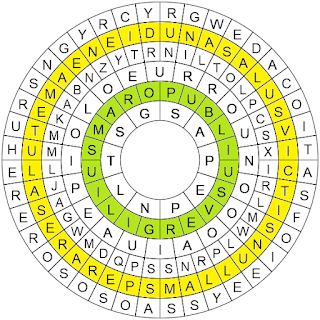 The second ring reads “UNA SALUS VICTIS NULLAM SPERARE SALUTE” from Virgil’s AENEID, which translates as, “The only safe course for the defeated is to expect no safety”.  Virgil’s full name, PUBLIUS VERGILIUS MARO is shown in the second innermost ring.

So "Do or Die" is an approximation if the sentiment expressed in  the quotation.


"Circular puzzles are always a favourite."

"What a brute!  My grudging admiration for the setter.  Had it not been for the word AENEID and the ODQ I would have been absolutley sunk."

"Nice change to have no grid searching or highlighting this month!  Not easy to copy out!  A bit of a struggle and some of the clues not very Ximenean!  Glad I finished it in the end.  Thought the letters appearing looked like Latin, the Aeneid appeared - easier after that."

"Circular puzzles are always fun to solve but I suspect their composition is tricky."

"The offset among the inmost rings made infilling tricky.  Confusion at clue 1 between UP and RUNS and UP in SETS.  Who is little Mary in clue 31?  A little Latin goes a long way."

"What a wonderful crossword!  One of the best ever."

"A very neat circular puzzle.  I liked that staggering of the bars in the second ring from the centre, so that the puzzle was not chopped into four-entry sectors.  The internet would diminish the gap for solvers who are unfamiliar with Latin, I found."

"Bit easier than expected, mostly because of very helpful clues."

"Excellent puzzle.  NABLAS took ages to find and I would not have got it all if I hadn't found an unusual definition for preposterous!"

"An interesting and well-constructed challenge.  Quite a chalenge, helped by the relatively early identification of the author and thence the quote.  Some necessatily obscure words but always fairly clued.  Thanks."

"The offset between rings 4 and 5 reduces the usual tendency of these circular puzzles to break up into blocks of four words, but it makes the grid harder to read.  A challenging adaptation of the classic circular grid, and still I managed to make a mistake in transcribing.  Clue/answer 9 takes the prize for originality, but my favourite was 31: I'd never encountered J M Barrie's term before.  Was there a reason for using this grid?  At any rate , I am relieved that I am safe."

"A neat theme which was cracked (luckily!) since I solved 21-27, found SPERARE and rushed to ODQ.  Good test, though."

"Very satisfying.  Some very tough clues kept the quotation, its source and the author hidden from us until near the end.  We still don't understand the wordplay for 31 and so perhaps the answer is wrong.  Of course, the really difficult part was copying out the answers on to the entry form!"

"AENEID came out early and I thought 'I know that bloke' and with my friend google, the rest was easy."

"I've set dozens of these and know how difficult it is to get a complete grid with all Chambers words and include valid rings.  Congratulations to Eclogue!"

"A very satisfying puzzle, particularly with the off-set second ring."

"Having the third-from-centre ring offset made solving easier, I think.  This was some compensation for having the quotation in Latin.
31.  I don't understand the wordpaly.
34.  I hope this isn't as bad as I think it might be.
35.  'Preposterous' seems a bit superfluous.  It's an inverted delta but I don't think that qualifies.
37.  Not in C."

"A satisfying challenge that became easier when I had enough letters in VERGILIUS to identify the author.  Congartulations on finding author, work and quotation with the requisite letter counts.  Some clues took more decoding than others but - as I expected with Eclogue - all proved to be impeccably sound."

"Working with answers going askew in circular diagram gave me a pain in the neck, but won nevertheless.  An ingenious twist.  Not too difficult once the 'arna vinumque cano' guy appeared - schooldays revisited!!  Testing but fair."

"The occasional circular is always welcome though this one lacks a circular theme and the unching clues caused a few problems - but pleasant to solve - and educational."

"I liked the way the grid structure differed from that of the traditional 'Mass' circular grid.  Virgil and Edward Thomas in one Edition!  Bliss.  A return to schooldays."

"Good selection of words, but I am left wondering why the quote, other than the happy coincidence of a 40-letterquote by a 20-letter author.  Good for a circular puzzle, but not an obviously circular theme."

Posted by Eclipse at 07:00 No comments: Links to this post

Man in the Middle


Eight unclued entries share a common link (four one way and four the other) the conjunction of which will provide the “man in the middle” who should be highlighted (seven cells), thereby requiring solvers to determine the order of the two letters to be entered in the cell that is initially blank following completion of the grid.  Answer lengths refer to grid entries. 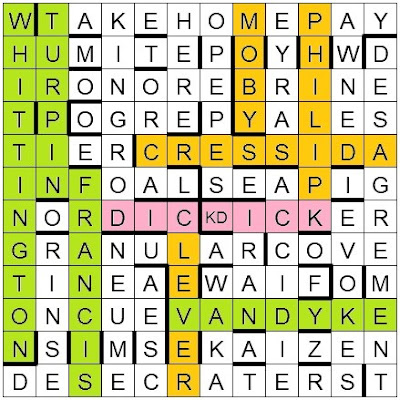 DICK can precede FRANCIS, TURPIN, VAN DYKE and WHITTINGTON, while DICK can follow CLEVER, CRESSIDA, MOBY and PHILIP K.  The “Man in the Middle” is therefore DICK DICK, giving the central highlighting and the ordering of the two letters (KD) in the initially blank square to offer both KICKER and DICKER to 25a.

Posted by Eclipse at 06:00 No comments: Links to this post