This puzzle appeared in the August 2018 edition of 1 Across magazine, issue no.329, as puzzle number 1857 and was the month's Prize Puzzle.


10 thematic entries are not otherwise defined. 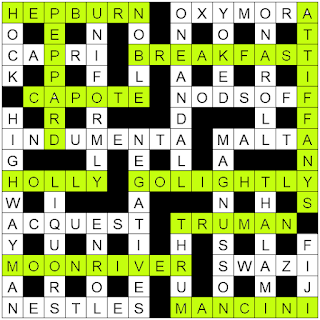 The theme is the film Breakfast at Tiffany’s based on the book by Truman Capote, scored by (Henry) Mancini and featuring the hit song Moon River with (Audrey) Hepburn as Holly Golightly, supported by (George) Peppard.


Posted by Eclipse at 17:06 No comments: Links to this post


Clues are listed in alphabetical order of their solutions and should be inserted into the grid wherever they fit.  Solvers must complete the barred off cells to reveal an alternative title to the puzzle.  One answer is in Collins.

SALMAGUNDI (n. a medley, miscellany) is the alternative title to the phrase “(at) sixes and sevens” (in disorder).

This is a follow-up puzzle to SIXES AND SEVENS published in the Crossword No. 473 (September 2017)

Some of your comments