Published by the i Newspaper on 15 March 2019 as Inquisitor 1586: Carte Blanche by Eclogue.


Clues, which are presented in conventional order, each have a misprint in their definition, the correct letters of which provide further instructions. The grid and entries will both be 180’ symmetrical, but neither bars nor numbers should be shown.
One phrase and a plural form are verified by Collins.


Correct letters in misprinted definitions spell ERASE ALL BAR FINAL CONTENTS OF PANDORAS BOX.
The unusual feature of the completed grid is a central fully checked 6x6 square, which contains diagonally HOPE.  Entries should therefore show HOPE as originally positioned and nothing else.
Posted by Eclipse at 11:16 No comments: Links to this post

Number 3 of the set.  This time it's a pangram featuring names from the TV comedy show "Friends". 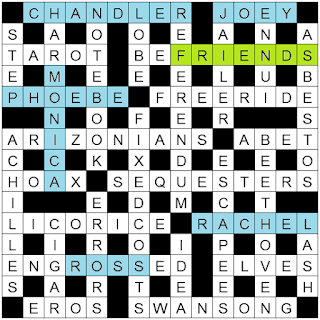 This appeared in the Magpie of February 2019 as Magpie puzzle 194.3 and was allocated grade C.  The preanmble states:

Answers to five clues must be modified before entry, while a further five entries are clued without definition.  Every clue contains an extra letter which should be removed prior to solving.  In clue order, these letters provide further instructions which the solver must follow.

(It should be noted that the clues for this puzzle were written with a football flavour, intended to slightly mislead.)

The grid depicts the five principal UK speed limits which are formed from parts of THE LOVE FOR THREE ORANGES, FOUR O’CLOCK, HAWAII FIVE-O, SIX OF THE BEST and SEVENOAKS.  Each speed is compiled from the numerical equivalent of the number in the answer concatenated with the immediately subsequent ‘O’.  The extra letters in clues spell DRAW RED CIRCLES AROUND SPEEDS AND HIGHLIGHT CAMERAS.  The title refers to penalty points received when being caught by such cameras breaking the limits than the football theme which the clues suggested.


Posted by Eclipse at 10:05 No comments: Links to this post