Clue lengths refer to grid entries. Solvers must highlight the individual responsible for the method of entry and remove the contents of the cell that is inconsistent with the title. 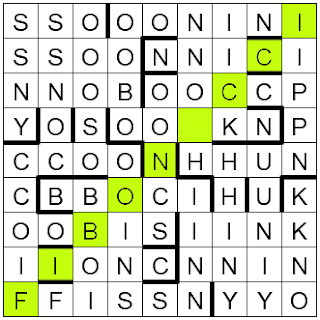 All entries are made using the first, first, second, third, fifth and eighth letters of the clue answer as far as is possible in accordance with the FIBONACCI sequence (a ‘periodic’ selection).  All letters used in the grid are single-letter chemical symbols with the exception of A, which must be deleted.

Posted by Eclipse at 12:54 No comments: Links to this post

The 14 will discover that 1 suggests 11 in the wordplay for 7 answers (including one answer in which such 11 occur twice). 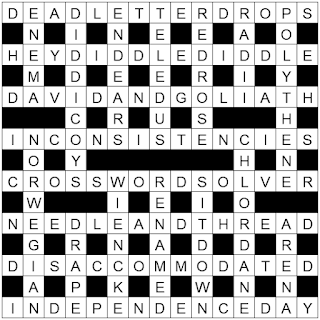 The 14 (CROSSWORD SOLVER) will discover thematic 11 (INCONSISTENCIES) in the wordplay for 7 answers (including one such occurring twice).

The wordplay ignores the instances of “three d’s” in seven clues and this is an oblique hint at the connection to 3D Calendar Crosswords.

• Some off-the-beaten-track solutions (notably WIENCKE), doubtless forced by the demanding grid. No walk in the park, even after you've solved 1-across. Ian McKenzie
• Amazing! Thankfully, 9-across quickly gave the theme. Len Colgan
• All those 15 letter clues! Took a while to find WIENCKE Island – took me into some interesting research. Thank you. Ann Millard
• Amazing. Brian Symons
• Very clever. Wiencke Island! Really! At least it didn't have a D in it. Roy Taylor
• An impressive piece of setting. I needed to resort to aids a fair bit and mostly resolved the wordplay of the seven affected clues after identifying the answer. Ian Thompson
• A most interesting grid pattern. Took a while to work out how some of the clues worked but got there in the end. Thanks for a great challenge. Ulla Axelsen
• An interesting concept with all the across clues being 15 letters. I look forward to seeing the explanation for 18-across and 19-down.Lynn Jarman
• Quite tricky and sent with fingers crossed! Robyn McKenzie
• A fairly hard puzzle, but each 15-letter word was a joy when solved. Max Roddick
• I would rate this puzzle as AAA, not DDD. Mike Potts
• Just hope I got this right. (you did Robyn and thank you for the card: Joan). Robyn Caine
• I was stymied halfway through until I changed 'lovers' to solver' in 14 across. Some very obscure (but not unfair) abbreviations. Kath Harper
•This puzzle had me scratching my head. Some solutions totally eluded me until Ian’s timely deadline reminder. Then mercifully; they appeared!! Many thanks. Julie Crowe
•A very clever puzzle. Tough going until I figured out the consistent inconsistencies! Laurence Kennedy

Posted by Eclipse at 10:00 No comments: Links to this post