Heading for Magpie this time, Bow End is a Circular or Radial puzzle, befitting its theme of Sumo wrestling.   Now Sumo is a bit of a 'marmite' sport:  to many no doubt it is just two (very) fat blokes bashing into each other, but wreathed as it is in technique, ritual and the over-riding Japanese / Shinto culture there is an awful lot more to it than that.

Even so, Sumo has courted its fair amount of controversy in recent times too.  In 2011, one of the six scheduled tournaments was cancelled following the discovery of a bout-fixing scandal.  In 2008, a trainer from a sumo stable was arrested in connection with the death of one of the junior wrestlers in his charge, which resulted from brutal beatings and ill-treatment as 'part of the regime' - he was jailed for 6 years.   Elsewhere, grand champion Yokozuna have been forced out by the Sumo Association; Futahaguro (60th) for a stable bust-up [he remains the only member of the highest rank never to have won a tournament], while Asashoryu (68th) was something of a rebel, who after various infractions with the authorities, got suspended and was ultimately forced to resign; although his side of the story is that he was removed to give the Association's preferred Yokozuna, Hakuho 'a free run'.  Interesting and part of the historic tapestry of sumo though these events undoubtedly are, they do rather besmirch what is otherwise a deeply symbolic, technical and at times very exciting sport.

In the UK, we have been rather deprived of exposure to sumo in recent times.  For a while, Channel 4 presented packaged highlights during the era of Chiyonifuji (the 58th Yokuzuna) who won 31 tournaments (basho) during his career.  More recently, Eurosport presented a series of highlight reels after the basho had completed, splicing 3 days into a one hour programme across the course of a week, there being 15 days to a tournament.

With the modern wonders of the internet, it is now possible to enjoy live streaming of the top-ranking Makuuchi division, which depending on the time of year either runs between (BST) 8-10am or (GMT) 9-11am for the duration of each tournament which are held every other month.  This can be found here: http://www.sumo.or.jp/en/index in the box which in off-tournament time shows a promotional video instead.

We had a 50:50 chance therefore that this crossword's appearance would coincide with a basho, and September is one of the three months that the Kokugikan hosts a tournament, the other three being spread across three other venues.  This time the 69th Yokuzuna Hakuho won through with a 14-1 win-loss record, his 27th tournament win.  Alongside Hakuho, Harumafuji was promoted in 2012 to the highest rank as the 70th Yokozuna. 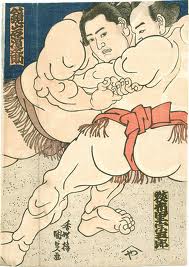 So, onto business.  Sumo phrases appear relatively regularly in crosswords, but we don't recall a puzzle using Sumo as the central theme.  The sport occurs inside a roped ring which is embedded into a clay platform, constructed each tournament for the purpose.  So, the grid had to be round and is therefore a representation of a dohyo.  The grid construction was simple enough after relaxing the 50:50 ratio of in-out radials - the design also meant that the corrections to misprinted letters would need to provide the letters for Ring 4, else there was a significant amount of over-unching.  The proliferation of Ks and Zs in the Sumo ranks provided only limited options in a couple of instances, so some of the construction was almost set in stone (or clay in this instance) from the off.   In circle 2, we showed the five ranks of the makuuchi division (the highest), in increasing order of rank, MAEGASHIRA, KOMUSUBIs, SEKIWAKE, OZEKI and YOKOZUNA (the grand champion rank) in circle 6.  The thematic word RING is omitted from SP(RING), ST(RING), (RING)ED and TI(RING) which form the two letter entries in circle 1 - these also show the four cardinal points that are present in the ring itself.  It was slightly frustrating that the radials could not be restricted to 6s all the way around, but the use of four symmetrical lights of 5 each did not spoil the overall effect, and did mean that we didn't have to resort to the dreaded jumbles!

Rather than any reference to a boat, the title is in fact a reference to the yumitori-shiki or bow twirling ceremony which concludes each day of a basho (sumo tournament).

Finally, such a theme does give us the opportunity to include what is probably one of the most iconic Sumo pictures, namely that of Konishiki aka 'the dump truck' who reached the Ozeki rank, before retiring, in this case facing Mainoumi ('the mighty mouse').   We hope solvers weren't similarly overwhelmed by the puzzle!

Posted by Eclipse at 23:56 No comments: Links to this post