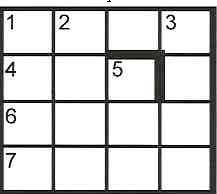 Congratulations on reaching the second part of "Cross-over by Eclogue". For this mini-puzzle, all clues are normal, but once complete, the sixteen letters of the solution can be re-arranged to form a three-word phrase appropriate to the time of year. It is this phrase which should be submitted with the completed solution to the main puzzle.

Posted by Eclipse at 21:17 6 comments: Links to this post

We heralded our debut as follows:-

"Seasons Greetings from Eclogue" is the first outing of a new compiling partnership formed from the previously unseen Eclipse and the occasionally seen, Logogriph. Having never actually met in person, the pair have enjoyed many an Internet chat based on a plethora of two topics, crosswords and alcohol. It was with an uncharacteristic lull in the former and probably too much of the latter that this joint venture was proposed and Seasons Greetings was born before either of them had time to change their minds!"

The first product of the collaboration between Eclipse and Logogriph, this puzzle had a Christmas theme based on a Goon Show song. The puzzle was accepted for publication at Derek Harrison's Crossword Centre and appeared on 1st December 2009.

The grid was designed to do two things - firstly to be a Christmas card design (so a nice dose of highlighting would be required) and secondly to blend a simple festive theme within. A number of solvers noted that "I'm Walking Backwards for Christmas" has provided thematic Crossword material before, but not quite like this we believe. Having decided on a modest 9x9 square with CHRISTMAS running from right to left, it remained to find other festive items that could form the diagonals and the central vertical in five letters, all using the central S. The very helpful SANTA CLAUS with a bout of SOCKS and of course we needed to get the GOONS in as well. A little juggling was required to get 9 letter perimeter lights and then it simply became a matter of filling in the gaps. The number of lights dictated the message to be used, which should ideally be another line from the song. Quite a lot for such a small grid, but aren't the smallest packages at Christmas often the most intriguing?

Click on the link below to view the puzzle:-

A decent number of entries - 49 - elicited a small number of generally positive comments:

Eclogue is grateful to all solvers and looks forward to providing further 'timely' entertainment soon.

Posted by Eclipse at 21:50 No comments: Links to this post