Eclogue have been uninundated by a piece of correspondence asking where the Blog entry for our latest festival offering has got to (thanks, Bob!).  Well, to ensure that we maintain the febrile atmosphere clamouring for our random witterings, we are belatedly putting finger to keyboard in an attempt to match the unprecedented level of demand.

As one commentator noted, it is good to see a Xmas related theme that hasn't been cooked longer than a 12-hour turkey and maybe these are getting harder to find, but as solvers and readers of these little entertainments will know, Logogriph and Eclipse draw on a fair wide range of literary and musical tastes when deciding on themes for their puzzles and so there are plenty more sprouts in this particular pot yet.  So gather up ye reindeer and let's ho ho ho..... 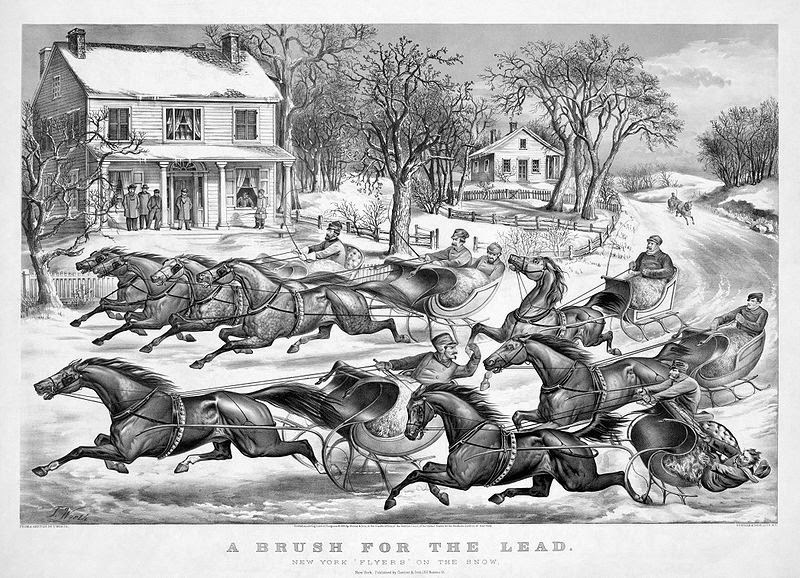 For 2014, our festive fare comes from the musical repertoire of US composer, Leroy Anderson, who composed this particular gem between 1946 and 1948. The tune will almost certainly be familiar to all solvers, but it is probably one whose origins are little known or remembered.  As Eclogue have previously championed the works of less main-stream composers (and will continue to do so - stop groaning!), like Frederic Curzon, this work seemed in our niche.


The words, which many are familiar with nowadays were added subsequently in 1950 by Mitchell Parish, and it is these that formed the substance of grid this year.

Thirteen letters, one per row, were omitted from the wordplay to clues spell out LEROY ANDERSON and 25 symmetrically placed contiguous cells spell out 6 words of the song's recurring couplet:

"COME ON IT'S LOVELY WEATHER FOR"

with the second line, containing the tune's title, to be written below the grid:

"A SLEIGH RIDE TOGETHER WITH YOU"

A SLEIGH RIDE TOGETHER WITH YOU


Rather than adopt a standard diagonal method of revealing the message, we opted for a sort of ski-ing / sleigh-ing slalom which was symmetrical across the grid, the positioning being pegged by the composer's name.  Far from being 'rushed' as one respondent thought, this grid was actually one of the longest in the series to compile, due to the relative inflexibility of the starting matrix of letters chosen.  Eclogue made the puzzle easier this year by not having a clue gimmick which will probably have assisted solvers to rattle through this crossword in early December before tucking into the more high-cholesterol fodder that appears around the festive week itself.

So is this "six and out"? to coin a cricketing phrase.  Well, we hope not as there is already a grid and some clues for SG7, which hopefully we will be able to persuade Derek Harrison at the Crossword Centre to entertain in 2015.  With thanks as always to Derek for supporting our series and to all solvers who commented as below:-


My initial interpretation of the preamble was that every instance of the relevant letter in each row would be not indicated by the wordplay, but it didn't take too long to see that this wasn't the case. I wasn't surprised that the down clues were also affected but I didn't expect that all of the omitted letters world appear in only two answers.

I knew that Leroy Anderson composed Sleigh Ride as an instrumental and the lyrics came later, but I didn't see the words in the grid until I had finished. I thought it was neat that the positions of LEROY and ANDERSON are forced by the highlighted cells.

many thanks as ever. Not hard, but a nice little Christmas workout. Any reason for the chevron shape?

Another fun festive offering from Eclogue - slightly easier than previous years I thought but no less entertaining. It took a while to spot the highlighting required but apart from that a fairly straightforward solve.

so far, those Christmas crosswords we've done this year have sadly been neither enjoyable nor seasonal - this one was at least seasonal, and the pdm made up somewhat for the solve (which was a bit of a slog).

A nice Christmassy romp as befits the theme and good to see the series continuing.  Thanks to Eclogue for the enjoyment.

An entertaining romp, with not too many problems apart from not actually
finding the R omitted in row 10 - both clues seem to work fine as they stand,
presumably I'm missing something!

Many thanks to Eclogue for a not-too-diificult seasonal offering, though I don't quite get how 23d works.  S for Special is the only wordplay - the ANDERSON part is omitted as this is the thematic composer.

Yet another clever puzzle by Eclogue!

As someone aware of Anderson's fairly extensive seasonal output I was pleased to see it was the most familiar item chosen.

Lovely puzzle, but it's definitely given me what the Germans call an "earworm"!

Another Season's Greetings by Eclogue, and as always a lot of fun, not too much difficulty, and a lovely theme. However, this one felt a bit more rushed than the previous offerings, both in the grid (quite a lot of fully-unched entries) and the clueing. It was also a shame that the omitted letters were (almost) full down entries in the grid. My main problem was that I felt the preamble was not accurate, in that it claims thirteen letters are omitted where they occur. I understood this to mean that if occurring more than once, they would be omitted each time, probably even in more than one across word, and possibly even in the down clues crossing the same row. This was clearly not the case. I also can't see where the R in row 10 is omitted.  It is always interesting to see interpretations not made by other solvers, checkers or the compilers themselves.  To our minds (and presumably others), the "where they occur" qualification related to their location, rather than "wherever they occur" which may more reasonably have led to the interpretation of the respondent here.  In hindsight, maybe the qualification wasn't required at all.  Presumably by 'fully-unched', the reviewer also means 'fully checked', as there are no entries without any degree of checking.  We have written on this subject previously and make no apologies for over-unching, only ever for what we consider, the unfair opposite.

The omitted letters form LEROY ANDERSON, and this alludes to his Sleigh Ride, with the additional verse including COME ON IT'S LOVELY WEATHER FOR A SLEIGH RIDE TOGETHER WITH YOU. The first 25 letters (until after FOR) are concealed in the grid in a horizontally symmetrical way (ie not standard crossword symmetry), two by two from top left down to the middle row, which has only the E of LOVELY, then two by two down to the left until the bottom left hand corner.

I enjoyed this offering from Eclogue, whose invitation is "COME ON IT'S LOVELY WEATHER FOR / A SLEIGH RIDE TOGETHER WITH YOU," taken from the lyrics that Mitchell Parish wrote to Leroy Anderson's "Sleigh Ride."
I only have a few quibbles, which may go away upon seeing the full explanation.
29a: Should this be enumerated (7,6) rather than (13)?
40a: If Eclogue intended this to be an &lit, it doesn't work for me.
43a: I'm not sure how "pony" = TAT (perhaps both refer to a small sum of money?)
49a: Should this be enumerated (5,8) rather than (13)?
The two 13's should indeed have said (13, two words) which is the convention in barred puzzles, rather than enumerating the exact word split.   See tat4 (tattoo) for the pony reference.
41d: The wordplay appears to be FOR ("in favor of") + A, but how does "it" = A?
See a2 in Chambers.

Many thanks to Eclogue for his 2014 seasonal invitation. Very entertaining and took quite a while to find the words from Sleigh Ride in the grid.

What a delightful puzzle!
The highlighted words are "COME ON IT'S LOVELY WEATHER FOR", starting with CO in the 1st and 2nd cells in the top LH corner, then ME in the 3rd and 4th cells on the second row, and so on, down to (and including) the E at the end of WINDING ENGINE;  then coming back down in a symmetrical fashion, finally arriving at O and R in the bottom LH corner.

A nice gentle solve to get us into the Christmas mood. I know how difficult it is to find yet another Christmas theme that hasn't already been flogged to death so congratulations to Eclogue on his horses.

Also, here's the December puzzle. The preamble has me a little confused as I don't understand the reference to "the more recent verbal addition to the work", but given the symmetric 25 letters in the grid (highlighted in a festive green), it seems this must be it. I also don't see the wordplay to 23d, but since LEROY ANDERSON must appear, the answer seems to be SANDERSON, with an R missing from the wordplay?  See above comment.

Posted by Eclipse at 16:48 No comments: Links to this post