Twenty three clues contain an extra word.  In clue order, the initial letters provide four courses, while the final letters provide their accompanying drinks.  Reflecting the thematic sketch cryptically indicated by one of the unclued entries, clashes in six cells should be left blank in four instances to note absentees while the other two should be marked with an X.   The name of the other character present should be entered below the grid.   The remaining unclued entries are the surnames of those involved.  Enumerations refer to grid entries. 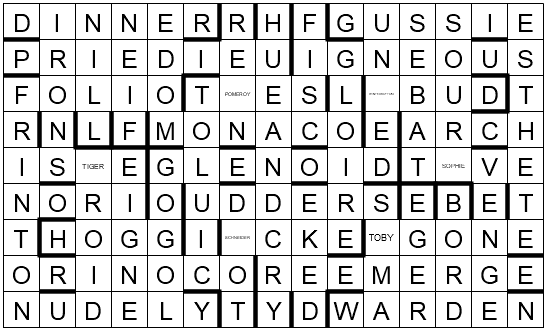 The theme is the comedy short annually repeated on New Year’s Eve particularly in Germany (the date translating to “Silvester” in German) called “DINNER FOR ONE” (hence, DINNER at 1a), a sketch starring Freddie FRINTON and May WARDEN.  The food provided is SOUP, HADDOCK, CHICKEN and FRUIT (the initial letters of extra words) accompanied by SHERRY, WINE, CHAMPAGNE and PORT (the final letters of those same words).  The grid is an approximate plan layout of the sketch, with the butler JAMES, literally ‘under the table’.  The frequently tripped over TIGER and the host, Lady SOPHIE are to be marked with an X, while the absentees referred to (Mr POMEROY, Mr WINTERBOTTOM, Sir TOBY and Admiral von SCHNEIDER) are left blank. 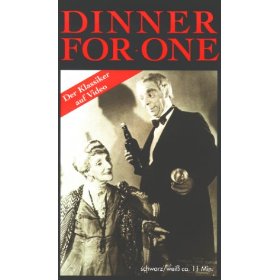 Dinner For One - the video


Dinner For One (Wikipedia Background)

Some analysis and solver feedback can be found on the Fifteensquared blog site under the link:

Posted by Eclipse at 17:44 No comments: Links to this post

Continuing Eclogue's series of "Seasons Greetings" Christmas-themed crosswords for Derek Harrison's Crossword Centre, number nine begins with a preamble which informs solvers that
"Each clue contains a misprint in the definition.  Correct letters in clue order spell out how to resolve clashes along with further instructions.  Solvers must complete these and highlight the clued light that identifies the outcome.  Enumerations refer to grid entries."

Solvers should eventually discover that:

The twelve clashes form PE/AR, DO/VE, HE/N, BI/RD, RI/NG, GO/OSE, SW/AN, MA/ID, LA/DY, LO/RD, PI/PER and DRUM/MER, alluding to each of the gifts from the “12 Days of Christmas”.  The instructions read REPLACE WITH DOTS, JOIN DOTS IN NUMERICAL ORDER, THEN BACK TO PEAR, to form the closed polygon of a six-pointed STAR.  31A should therefore be highlighted to indicate a “star in the East”.


Solver feedback on this puzzle: