Welcome back to the Eclogue Blog.

On 7 July 2018, Inquisitor 1550 hit the "i" with the latest in what has become a bit of a theme for this setting partnership in this publication, namely comedy sketches or series.  We have previously tackled Two Soups (Victoria Wood), Are You Being Served?, Dinner for One, Red Dwarf, The Ladykillers and 'Leg over'.

It was perhaps inevitable that our attention would turn to arguably one of the best-known and well-loved television sketches of all, namely FOUR CANDLES, with its clever wordplay and simplicity.  This sketch was always on our radar for a puzzle, but was moved up the list somewhat when comments were made about the recognisability (or otherwise) of comedy sketches in various other blogs, not least, the Two Soups one.

The original drafting of the puzzle focussed on the version in "All I Ever Wrote" by Ronnie Barker, which ends with KNOCKERS, rather than BILLHOOKS.  The former was used in the touring stage production of the sketch, but not the (argubly more widely known) television version.

As verbal ambiguity is the very essence of the sketch, we were always looking to employ a homophone device in the clue-ing.  It is noteworthy that the initial response from the editorial process was in recognition of the effort involved - "I must say you do make rods for your own backs when clueing(!); however this was very much enjoyed by all."

The preamble reads: "Eclogue provided the clues verbally, but each contains one word which has been misheard by the editor, while two were missed altogether. The initial letters of the correct words in clue order spell out most of a thematic list, the missing items from which must be highlighted in a contiguous arrangement of the theme." 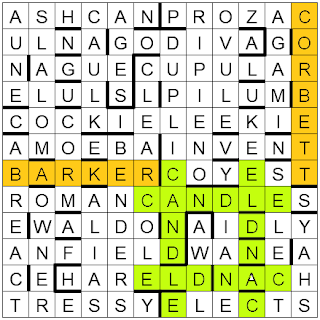 This puzzle celebrates the famous FOUR CANDLES sketch by THE TWO RONNIES.  The initial letters of corrected homophones in clue order provide PLUGS, SAW TIPS, HOES, PEES, PUMPS, WASHERS and BILLHOOK, the items on Ronnie BARKER’s hardware shopping list in Ronnie CORBETT’s store.  The first item FOUR CANDLES (FORK HANDLES) must be highlighted in the grid.  IVY sounds like IV, the roman numeral for four (linked to ROMAN CANDLES at 24 across). 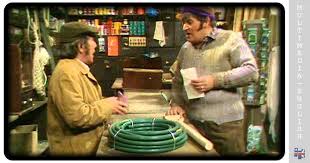 It is perhaps unsurprising that a crossword based upon a comedy sketch of verbal ambiguity has itself some ambiguity.  After all, homophones generally are ambiguous simply by the nature of pronunciation, to say nothing of regional accents prevalent throughout these lands.

Eclogue do catch up with blogs and suchlike connected with their puzzles, but usually refrain from comment.  We did note this time however a tendency for solvers to over-complicate matters and would like to apply the following "cold towels" (they're not the things you use in the garden by the way!).

"The missing items" are the four candles, not the sketch, the actual candles.  While these are placed on the counter by RC side-by-side, rather than in our configuration, they are unambiguously straight, so any attempts to highlight wonky night-lights would have wasted a stamp.  Could we have indicated the nature of the arrangement? The original idea was to indicate the 'number' hash symbol, but as this is more normally presented obliquely, any reference to that was ruled out.  An indication of symmetry may have helped some, but it would have raised the dander of many.  The symmetry only exists within the configuration (and if we apply it to the letters, only in mirror form about diagonal axes of the shape), and not to the grid as a whole.   With one candle, in plain view within ROMAN CANDLES, it was deemed that no further assistance would be necessary this time around.

In terms of the list of letters, we didn't say they were going to be either the correct or the misheard versions deliberately (e.g. no reference to 13-amp etc), only that they were most of a 'thematic list', which is itself ambiguous (of course).  On that point, the sketch does not confirm whether RB wants one or two "bill hooks" (fade out occurs before RB responds), it is only written in plural on the drawer in the shop.  So anyone looking for the plural has only inferred what may or may not have been on the shopping list, as did we when selecting the singular (which had the same number of letters as the originally intended KNOCKERS of course).

We always marvel at the ingenuity of solvers to find new ways to confound or delay their solve, some intentional (See Inquisitor 1444: OURS), others less so.  However, the excellent editorial solving / checking team provide a high level of scrutiny to any oversight by us setters.  Anything that all of us have missed, is more likely than not, purely in the eye of the beholder.

Posted by Eclipse at 11:54 No comments: Links to this post