The seasonal theme words, A and B, each have three sets of unclued variations, derived in a consistent way, indicated by 1, 2 and 3.  One of the ‘3’ variations has two otherwise valid alternatives.  The puzzle title provides the total for the first three characters in the same format to confirm the alternative that solvers must use. 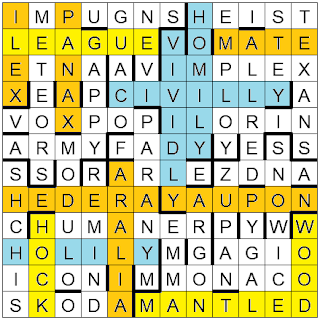 The theme is the popular Christmas carol, The Holly (A) and the Ivy (B).

Variation one are words which can be added:
(A)    HOLLYWOOD and HOLLYHOCK; (B) IVY LEAGUE and IVY-MANTLED

Variation two are familial plant names:
(A)    ILEX, MATE and YAUPON ; (B) ARALIA, PANAX and HEDERA

Variation three replaces the roman numeral components of HO(LL)Y and (IV)Y to form new words.
(A)    HOMILY and HOLILY ; (B) VIVIDLY and CIVILLY
V+I+V = 11 (or XI) to eliminate the possibility of LIVIDLY 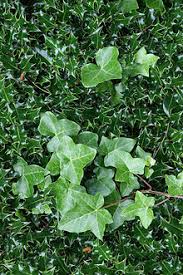 Not 100% sure but I can't see what else these could be:  For HOLLY variation 3, answers appear to be HOLILY and HOMILY, for IVY they are CIVILLY and VIVIDLY. IVY appears in both answers, but HOLLY does not. So I am missing the "consistent" part of the derivation of these answers. But, nothing else seems to fit.

Thanks to Eclogue, and season’s greetings indeed to all.

It's been ages since I was able to solve a Crossword Centre puzzle completely. I might have gotten something wrong on this one, but I enjoyed it so much that I had to send in my solution. A very pleasant romp on the theme of "The Holly and the Ivy". Happy Christmas (Georgie explained to me that you don't say "Merry Christmas" in the UK) and New Year to you and to the two at Eclogue.
I do think 20 was a bit obscure (I needed the Chambers Gazetteer), unless it has some significance to Britons of which I am not aware.
This was a very good puzzle and I found it quite a test with some unusual words added to my lexicon.  A very clever grid too.  It was nice to learn the identity of the compilers and I recognise Eddie as a prolific solver of prize crosswords in the Times and Independent.

That was a nice way to end another great year.

Please see attached my entry for Seasons Greetings XI. Relatively straightforward given the fiendishness of recent puzzles. My only concern is an incomplete understanding of variation 3 and how those entries specifically are formed. I look forward to finding out when the solution is released. Many thanks for a year of excellent puzzles. I always look out impatiently for the next one!

My solution is attached, although I don't quite see how variation 3 works, as although the others include the letters of the theme word in order, the one at 6dn loses an L.  Also, the clue to 8dn is wrong: although Chambers defines the word as 'steep', Collins makes it clear that it is 'precipitous' rather than 'pricey'.
This was a toughie. It took my third online anagram finder to locate Ilorin and Zdna was a bit testing too. However I did get great satisfaction from completing it!

Thanks to Eclogue for keeping this series going, and keeping it fresh.  I like the device of using the puzzle title to complete the final entry – a nice touch.

I enjoyed the solve and discovering the theme which was deployed with commendable imagination by the setters. A neat set of clues added to the satisfasction - thanks to Eclogue.

It took quite a while for the penny to drop, almost had all the clued entries in before so. A few new words for me - shchis, panix and zdna amongst them.  A nice endgame and I think I've got the correct alternative at 12D.  Last weekend's Listener theme helped!

Enjoyable puzzle. Not too difficult.

Thanks to Eclogue (both of them.)
In general this was quite accessible, although the '3' variations did seem a bit arbitrary, presumably the consistency including the fact that the included letters were all Roman numerals.

Many thanks to Eclogue for another excellent crossword. Theme and Variations provided quite a tricky challenge.

An interesting puzzle but I’m not sure I fully got the ‘3’ variations completely - not my favourite in the series but enjoyable nonetheless.

I enjoyed it immensely. It was like a treasure hunt for the 14 unclued once I cottoned onto the theme. I did manage to make the NW corner harder for myself by initially entering “Aethers”, an anagram of “heart”, “e”, and “s” (the faces of Eros), instead of “Meteors”. Once I realized my mistake 1A and 18A were the last 2 to fall.  Many thanks as always to Eclogue for the annual challenge.
I usually worry about my ability to solve a puzzle with so many unclued entries, but I didn't find it too hard to solve enough clues to work out what was going on. I managed to guess words that could be the '2' variations first, which led me to the theme words and then it wasn't too hard to work out the other variations, with the extra hint from the preamble that the '3' variations involved Roman numerals.  I initially thought that the '3' variations involved adding more Roman numerals to the theme word until I came to 6d. I used an electronic search to find other possible '3' variations which confirmed that those appearing in the puzzle plus the unused alternative are the longest possible for each theme word.

Very, very tricky. Thanks for the challenge.


Posted by Eclipse at 08:00 No comments: Links to this post