In a previous blog posting, we suggested that if you ever saw a bespectacled commuter travelling on the 8.56am train between Winchester and London Waterloo reading a slim volume of a seemingly obscure work, it could well be Logogriph researching the next Eclogue project.  The advice would've been well-heeded as, in the search for something light-weight for the journey, "Burning Bright", a play-novelette by John Steinbeck came to hand.  (Yes, Logogriph has yet to join the Kindle revolution, preferring the physical exertion of turning pages to looking at a screen, which forms far too much of his existence already).

Although it is nowhere near as famous as "The Grapes of Wrath" or the more size-wise similar "Of Mice and Men", it does possess the same flow and dialogue style of those works for which John Steinbeck is better recognised.  It seems only fair to warn our solver in Skelmersdale, that Logogriph has several similar volumes, but no plans yet with respect to Sweet Thursday, Tortilla Flat or similar, but who knows?

The main characters in the book are Joe Saul and Mordeen, a married couple, Friend Ed, their long-time friend and Victor, Joe's assistant. The ageing Saul is desperate for a child and Mordeen, suspecting he is infertile and in order to fulfil his wish, becomes pregnant by Victor. When Joe later discovers he is indeed infertile and the child cannot be his, he is helped through the crisis by Friend Ed.

The introduction page cites the William Blake poem "The Tyger" and there's nothing that Eclogue like more than two potentially inter-connected themes. 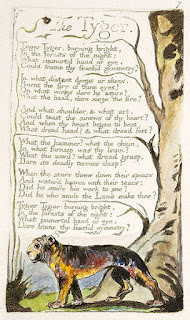 The book's title is taken from William Blake's poem The Tyger and misprints in the clues spell out the second and fourth lines of the poem. In the initial grid WILLIA_MBLAKE appears at 25 across and this must be replaced by JOHNSTEINBECK in the final grid. Lastly, three of Steinbeck's main characters (JOE SAUL, MORDEEN and FRIEND ED) were to be highlighted in the grid and below the grid must be written the answer to the question 'Who's The Daddy?' - VICTOR, an apt description for the successful solver.

It has been interesting to read comments from solvers who struggle to Google an appropriate title or author.  Many were seemingly held up by trying for TIGER rather than Blake's spelling of TYGER, which would have eliminated a lot of possibilities, or by some rather more recent incarnations of the "Burning Bright" title by among others TRACY CHEVALIER, but these were either too long, too short or didn't allow for real words to appear in the final grid.  Indeed, JOHN STEINBECK provided two of the letters of the characters to be highlighted specifically to confirm the correctness of that outcome.

Eclogue much prefer puzzles that have some degree of ingenuity that indicates that the setter has had to go to some efforts to produce the challenge before the solver, and particularly enjoys those that have some form of grid manipulation as an outcome, especially when the result still yields dictionary-found solutions.  With electronic aids, it is becoming too easy to churn out vanilla puzzles, which while nice enough, don't quite have that sparkle to be memorable.  We're not saying that ours necessarily achieve this, but that is what we aspire to.

The other aspect for us is to provide something that a solver doesn't know.  Our crosswords aren't designed to be an exam or a pub-quiz where knowledge can be repeated by rote, but to allow solvers to explore something hopefully new and enjoy the discovery that may result.  It was a Listener many years ago, based on the Five Tailors by Dorothy L Sayers, for example that introduced Logogriph to a queen of crime-writing and similar nuggets have been acquired over the years since.  The inquisitive mind will always read around the subject, explore new avenues and who knows, share that knowledge with others.  All very Fahrenheit 451 (which we've already done as a puzzle in the Magpie!) but you get the idea.

Not that nearly forgotten literature is our only source of inspiration, as hopefully you will soon discover.  Logogriph also does a lot of work with LOCO, the London Comedy Film Festival, through which there is a veritable gold mine of potential material, but maybe some of that is just a little too obscure.  It is however a great way to brighten up what is described as the most depressing week of the year at the end of January (2014 festival just finished, but they hold events throughout the year)- http://locofilmfestival.com/

Published on 18th January 2014 in the Independent as Inquisitor 1317, Who's The Daddy? is our third submission to this series.