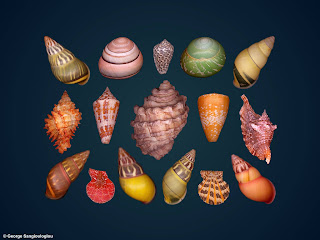 To date, there has been no discernible trend in Eclogue's selection of themes (aside from the Christmas series on the Crossword Centre).  For those of you who are just as likely to memorise the order of a pack of playing cards, or all of the Epsom Derby since 1780, you'll know that we have to date published puzzles on Dirty Harry, Fahrenheit 451, Snowflake Sudoku, and one where the solver ended up throwing away the very thing they had solved.  If there were a Random Puzzle Generator button on Eclogue's theoretical mousepad, it would already be suffering from severe over-use.

The Crossword Club gave Logogriph his first successful outing into publication with Birthday Party, a puzzle which can be found here:-

Logogriph is now into double figures of Club published puzzles and therefore has a very definite fondness for this outlet which has done much to foster his love for the art, so when, in electronic conversation, Eclipse and Logogriph broached the subject of submitting to the Club under their Eclogue banner, it was a challenge met with considerable enthusiasm by them both.

"Middle Classes" is remarkably 'normal' when compared to previous Eclogue puzzles, in that it is simply about shells and their inhabitants.  This puzzle however was all about the technical delivery - it is the first that Eclogue has delivered with 4-way symmetry and groups the correspondingly placed clues in sets (one normal, one Printer's Devilry (another first for Eclogue), one with misprints and one with extra letters).  The grid is completed with 8 unclued thematic words, also symmetrically placed throughout the grid.


Originally, the puzzle was entitled "Ssssotss" which represented the old tongue-twister "She sells sea shells on the sea shore", but this replaced during the checking process as it was viewed to be too obscure.  A 'shell' is also an intermediate class, hence the revised title used.

It was only after the receipt of checkers comments that Logogriph spotted a not-quite-fatal flaw, in two sets of clues had not been married up correctly.  As luck would have it, two of the clues were misprints using the same letter, so were interchangeable, but one PD clue needed to become normal and vice versa.  A swift piece of remedial action later brought everything back into sync.

55 comments were received from setters and these are shown below:-

To which we replied as follows:-


"Eclogue are grateful to the 55 members who took time to comment on their debut puzzle for the Club. “Middle Classes” (a definition derived under ‘shells’ in Chambers) was regarded as difficult by most, so solvers will be grateful that the vetting process resulted in the grouping of clues and a change to the title from “SSSSOTSS” (representing, “She sells sea-shells on the sea shore”), which was alluded to in the ‘sure to hear’ comment on page 1.  A few solvers were delayed by guessing ESCARGOT rather than ESCALLOP for the corrected letters to misprints, but aside from the odd minor error, the vast majority of entries received were correct.

A couple of commentators noted the small number of unches.  However, until the theme is deduced and the unclued lights ascertained, it could be argued that the puzzle is in fact over- rather than under-unched – as Eclogue eschew electronic setting aids, either in grid construction or clueing, this was entirely by design.

While most of the reaction tended to be on the positive side, a fair proportion expressed dissatisfaction at the use of PD clues.  Given that PD is not universally popular with solvers, this was almost always going to be the case!  However, most of the adverse comments singled out two or three of these clues in particular, which may well be justifiable in hindsight.  We still feel however that PD was an appropriate vehicle for at least part of this puzzle, as the devilled versions are themselves ‘shells’ concealing their answers.

Overall, we were delighted that most solvers enjoyed the challenge and hope to be able to grace these pages again in the future. "