An Alphabetical Jigsaw submitted to CrOZworld in July 2021.

A nice short preamble reads "Solutions begin with the given letter.  Place them in the grid jigsaw-wise, where they fit."

As well as the peripheral NINA, the longest entries are (A)cross and (D)own.

Slot 4. Another challenging puzzle from Eclogue, complete with three mini- Ninas, identified by a number of solvers. PEDALED needed the American usage to be derived from the former, although associated clue and resulted in four incorrect entries, PERONED, BETAMEN, PEDALER and PENALED. HYPOGRYPH, requiring a cunning interpretation to derive the “gryph”, resulted in a further four errors. Other errors included XMAS (2) and XION for XIAN.

Slot 5. Comments by solvers would suggest that three-letter words are not

·                     Definitely a challenge here, with several new or unfamiliar usages. I liked NEUTRALIST, and had to guess for A, F and J. Not sure about Y either, if Shaky is part anagrind and part indicator. Kathy Horadam

Appearing in the i Newspaper as Inquisitor 1720

18 clues each omit a single letter in their wordplay, which should also be entered at the foot of the corresponding column in which they appear. The remaining 21 clues have an extra letter in their wordplay which when taken in clue order provide five consecutive words from a poem (in ODQ) whose author is provided by the circled cells.  Solvers must highlight the two rows that provide cryptic representations of three further lines of the poem.

There was a young lady named Bright,


The theme was card games:

For good measure, the suit Diamonds was thrown in as well.

Appearing on the Indian 1ACross site.

All clues are normal, but are divided into four sets of twelve solutions each, as follows:-

C) C     Each solution is entered as a single word anagram

All resulting entries are real words or proper nouns. Taking one original solution from each of the three sets will provide a musical group, three current or former members of which appear as entries in the final grid which should be highlighted, together with one of their hit singles (nine letters in a straight line, enabling the central square to be completed).  Four clue solutions provide two other hit singles by way of confirmation.  All enumerations refer to the length of grid entries.  One solution is in Collins. 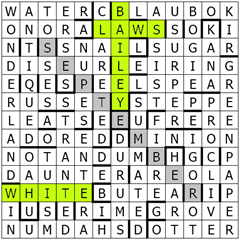 Maurice / Verdine WHITE (38a), Philip BAILEY (6d) and Ronnie LAWS (12a) are/were three current or former members of EARTH (35), WIND (38) & FIRE (26d).  Their hit singles included LET’S GROOVE (24/41) and BOOGIE WONDERLAND (9/1d) and SEPTEMBER (highlighted diagonal – which with the help of the letter string in the preamble also resolves the two occurrences where the added letter is otherwise unchecked at 24a and 3d).

Look It This Way

All answers are six letters in length.  Some clues have a misprint in their definition, the correct letters for which, in clue order, indicate the new position for a specific entry.  An instruction in the completed grid leads to a further indication how this should be achieved.  The final positions of all other entries must follow the same method.  Three otherwise extraneous words confirm the direction of travel.  If we LOOK AT IT THIS WAY, all entries should be capable of conventional reading after compliance with all instructions.  Solvers are advised to use a pencil.

Corrections to misprints in odd clues spell “ONE ACROSS IS NINE DOWN”.  The completed grid provides the instruction “READ LAST LETTER OF EACH EVEN CLUE” which then gives “TURN THROUGH RIGHT ANGLE”.  Extraneous words are DEXTRORSE, LAEVOROTATORY and WITHERSHINS indicating the ANTICLOCKWISE rotation required, so that the grid should be turned such that NINE DOWN fills the ONE ACROSS slot.  The grid should therefore be re-written having been turned through 90 degrees and be able to be read from the right hand edge (else some entries will only be readable in reverse).